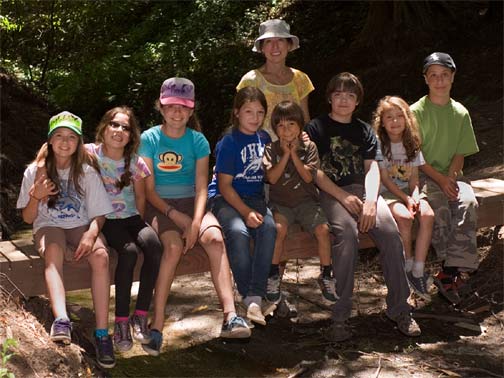 Having grown up in the mountains of Felton, California I developed early on a passion for being outside, digging in the dirt, growing things and raising animals. My great grandfather, Louise Angier came to California in the late 1880’s and was one of the first men to plant vineyards in the San Joaquin Valley while my grandfather Joseph Renelle, came from Italy in 1904 and planted many of the orchards in what is now Silicon Valley. It only seemed natural that my genetic disposition toward agriculture would develop sooner or later.

In 2001 my third child Sophia was born and it became a life-changing event. I had worked in local education for 15 years as a teacher and administrator and at the time of her birth I decided I wanted to re-invent myself, my career and be home to raise my children and began to plant a garden. Having grown up on acreage with a variety animals, I wanted my own children to have the same experience I had and so little by little, a menagerie of creatures began to appear on my own ranch. My childhood was spent riding horses in the mountains near UCSC so it only seemed natural to first develop a boarding stable for horses. Later I added a large flock of chickens and a few adorable Nigerian Dwarf goats.

In 2008 my late father, Rudy Renelle, surprised me with a wonderful birthday gift of a Kabota Tractor and so I began my dream of developing an organic farm. With it I built both a grey- and rainwater collection system for the flowers, landscaping and lavender. I then added an area to compost the horse and animal manure. I wanted everything on the farm and ranch to be recycled or reused since my goal was to provide a model for sustainable farming and self-sufficient living.

A few months after my father passed away I started growing the first season of organic vegetables, fruits, flowers and English Lavender for sale. I opened our first farm stand at the ranch in the summer of 2009 selling vegetables and fresh eggs and was overwhelmed with the incredible support and response from my neighbors and friends who helped me succeed in my dream and follow my passion and do what I love to do best.

In addition to running my sustainable farming business, I am a strong believer in giving back to community and always seeking ways to improve the economic livelihood of the San Lorenzo Valley. I am a member of the Felton Business Association, San Lorenzo Valley Women’ Club, and was recently appointed by Mark Stone to serve on the Senior Commission for District 5. I also write grants for a variety of non-profit organizations, primarily working with the Special Parents Information Network, a non-profit organization dedicated to helping special needs children and their parents in Santa Cruz County.